This post is review of the Sarosh Zaiwalla's interesting autobiography titled ‘Honour Bound: Adventures of an Indian Lawyer in English Court’.
I practised law in Allahabad, where I was elevated as well. Then, became Chief Justice of Chhattisgarh. After my retirement, I started as an arbitrator in a case but recused myself in the middle of it. I realised that money is not everything, I should do, what I enjoy most – reading, writing, and occasionally appearing as a lawyer. I never dealt with maritime law and had never heard of Sarosh Zaiwalla, an Indian maritime solicitor, based in London. I also never came across his autobiography ‘Honour Bound: Adventures of an Indian Lawyer in English Court’.
Sometime ago, I read that Abhishek Manu Singhvi has settled his differences regarding his father LM Singhvi in Jaiwalla’s autobiography and the book will now be available. This piqued my interest in the book and I purchased it. It kept lying, then one day, I picked it up. I must say, I was surprised.

The book has a little bit of Parsi history, some personal details and is mostly about the cases dealt with by the author. But the cases dealt by him made me envious. I know of no other lawyer, who might have dealt with such a variety of them. Perhaps, the arena of practice being London, made it possible.
Soliciting work is unprofessional but increasing ones network, meeting people, impressing them - isn’t and the author understood it well. This has stood him well in the long run. This is how he puts it,

“I started going to Delhi … go through the phone book, calling business houses … and say, ‘I am from London and would like to meet you’. … they would invite me … and from these meetings work began to flow.”

The author is a polished person, uses soft language, even for those, whom he dislikes. He is capable of getting along well with the people having opposing views. He is close to Congress and to Sonia Gandhi but it was NDA government that honoured him for his contribution in the field of International arbitration law on 2002 National (now Constitution) Law Day.

Lateral, Out Of Hat - Thinking

During my student days, I had read Edward De Bono's 'The Use of Lateral Thinking'. It explains, why some people get new ideas; whereas, the others equally or more talented don’t. De Bono says the difference lies in their way of thinking. He calls it ‘lateral thinking’ in contradistinction to straight, vertical, and logical thinking. Sarosh Zaiwalla appears to be a good practitioner of the same. This may be the reason of his winning many hopeless cases. He prefers to call it ‘out of hat’ thinking.
Law is one of the oldest professions and starting it in another country with established professionals is difficult – racial discrimination, jealously is sure to be there. But with grit and determination, one can always overcome. This is the journey that the author took and succeeded.
Despite the fact that we have inherited legal system from the British, there are subtle differences. The book points out the same. It is fast moving, written in easy English, deals with cases involving Indian, Chinese, Russian and Mongolian governments, as well as leading celebrities. It is absorbing and one does not want to leave it, till it is finished.

I recommend the book to all those, who dream to enter litigation field, or have already entered or wanting to set up practice in a foreign land.
The title of the book is ‘Honour Bound’, author is Sarosh Zaiwalla then why have I titled it ‘Maximum God Almighty - Minimum A Stone’. Well, you have to read the book to understand it :-)
#BookReview #Arbitration #Autobiography
at June 11, 2021

What Irritates A Judge Most

It is important to pay attention to the observations and queries of the court. This post explains the same with an incident, at early stage ... 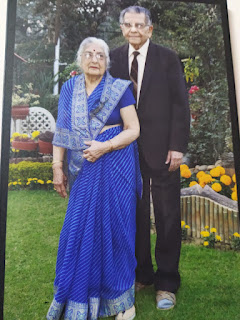